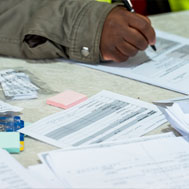 Class action litigation was instituted in 2012 by Richard Spoor, Abrahams Kiewitz and the Legal Resources Centre. The parties reached a negotiated settlement on 3 May 2018, details of which are available elsewhere on this website.

A total of 32 respondents were cited in the litigation, although many of these were previous structures or current divisions of existing companies. The six Working Group companies are the six largest respondents. There are three others.

The litigation covers the period since 1965 and addresses silicosis and TB.

The South Gauteng High Court granted class certification in May 2016 after a hearing the previous October. The companies were granted notice to appeal against the judgment. However, because settlement discussions were proceeding promisingly, in January 2018 the parties requested the court to postpone appeal proceedings until further notice. The court agreed, and the postponement remains in force. It will be possible to withdraw it completely if and when all conditions for the implementation of the agreement have been met.

Settlement talks in fact began between the Working Group companies and the claimants' lawyers in early 2015. The talks ran parallel to the legal process.

It may be asked why the parties sought a settlement rather than pursuing litigation. We believe that both groups had strong incentives:

From July to September 2017, as a consequences of progress made, each of the six working group companies made financial provisions based on their estimates of the settlement costs. Different methodologies and bases were used so the amount cannot easily be aggregated. However, the total pre-tax nominal amount totalled around R5 billion.

On the 26 July 2019, a full bench of the Johannesburg High Court approved the settlement of the silicosis and tuberculosis class action suit.

One further step that needs to be taken before the commencement of the operations of the Trust which will administer claims and payments to eligible claimants, is that class members need to be given the opportunity to opt out of the settlement. This is because the agreement acknowledges that no individual can be forced to forego his or her right to pursue litigation should he or she so choose.

Court approved notices were published and broadcast in newspapers in SA and other southern African countries over a period of four weeks to inform class members of their right to opt out of the settlement agreement. Class members will then have an additional 60 days to submit their opt out forms, if they so wish.

Once the opt out period is over, and the settlement agreement becomes effective, the Tshiamiso Trust will then commence with the real work of implementing the settlement. This will include the Trust tracking and tracing class members, processing all submitted claims, including the undertaking of benefit medical examinations and the payment of benefits to eligible claimants.